Teen Company students attend one-hour, age-specific classes, on Saturday mornings for 10 weeks. All Teen Company members are encouraged to audition for a role in that semester’s play.

Teen Company are also encouraged to assist with technical responsibilities for the Players and Ensemble productions, such as Assistant Director, Stage Manager, Props Crew, Light Board Operator, and Sound Board Operator. 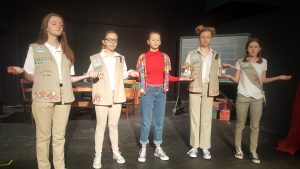 By D.W. Gregory
(Taken from the Dramatic Publishing website)

In 1926, radium was a miracle cure, Madame Curie an international celebrity, and luminous watches the latest rage—until the girls who painted them began to fall ill with a mysterious disease. Inspired by a true story, Radium Girls traces the efforts of Grace Fryer, a dial painter, as she fights for her day in court. Her chief adversary is her former employer, Arthur Roeder, an idealistic man who cannot bring himself to believe that the same element that shrinks tumors could have anything to do with the terrifying rash of illnesses among his employees. As the case goes on, however, Grace finds herself battling not just with the U.S. Radium Corporation, but with her own family and friends, who fear that her campaign for justice will backfire. Written with warmth and humor, Radium Girls is a fast-moving, highly theatrical ensemble piece for 9 to 10 actors, who play more than 30 parts—friends, co-workers, lovers, relatives, attorneys, scientists, consumer advocates, and myriad interested bystanders. Called a “powerful” and “engrossing” drama by critics, Radium Girls offers a wry, unflinching look at the peculiarly American obsessions with health, wealth, and the commercialization of science.

Mondays and Thursdays from 6:00 pm-8:30 pm;
Saturdays from 1:00 pm-4:00 pm
Auditions are January 25 and 27, 2020
Cast list posted no later than January 31, 2020
Rehearsals begin February 3, 2020
Performances are April 3-5, 2020
A detailed rehearsal calendar will be released with the cast list.
Please note that we will make every effort to accommodate conflicts that are provided in advance.

Students will: Focus on the audition process, working on monologues and cold reads, study movement and voice to appropriately portray a character in performance, generate interpretations of scenes & characters, and learn to take risks in creating character choices–failure & making mistakes is part of the process!

You DO need to enroll in a Theatre Class to take this class.

“Be creative and be brave and rise to the occasion of your own ideas.” -Vanessa German

This is a free program offered for any Toledo-area teen interested in creating original theatre around relevant topics. You do not have to be enrolled in any of CTW’s other programs to participate, but you do need to register so we can have your information on hand.

Teens in this program will brainstorm, tell stories, research, interview, and devise an original theatre piece about a topic of the group’s choosing. Topics have included mental health/illness, body politics, and gun violence in schools.

Our first meeting will be Wednesday August 28, from 6:00-7:30 pm, in the Tansey-Zimmerman Theatre.

Email Aimee at [email protected] if you have questions.

November-December CBC Meeting Dates
(All are Wednesday from 6:00-7:30 pm in the Tansey-Zimmerman Theatre at CTW)

November 18, 2019
Scholarship applications are due

January 11, 2020
First day of Saturday classes for the Fall semester