Children ages 7-9 continue their CTW experience in the Players Company. Players Company students attend one-hour, age-specific classes, on Saturday mornings for 10 weeks OR Tuesday nights for 8 weeks. All Players Company members are encouraged to audition for a role in that semester’s play, which is presented weeks after classes have concluded. 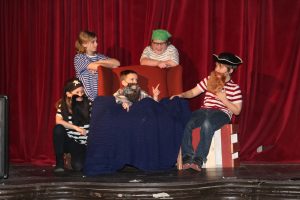 Theatre Classes for The Players Company

Introduction to theatre, using play and story drama to introduce character development. Students will begin to practice auditioning and basic theatrical terms. This class is for all 7 year olds, and 8 year olds who are new to CTW’s programs.

Slightly more advanced than the younger class, this class starts delving more seriously into character development using improvisational  activities. More advanced theatre terms and script work are introduced in this class as well. This class is for all 9 year olds, and 8 year olds who have previous experience in CTW’s programs.

Everyone knows the story of the emperor’s new clothes, but what about his old duds?  You’ll love this new twist on an old story with a playful theme of fashion and sewing!

In this version, kind Emperor Pintuck of Wardrobia is happy just being himself and prefers wearing his old fishing overalls instead of a traditional royal wardrobe.  But his vain wife, Empress Chantilly Lace, thinks an emperor must look regal to be respected.  So when her favorite royal staffer, Sir Starch, tells of a trio of tailors who can weave magical, unseen cloth that can only be seen by smart people who are good at their jobs, Chantilly is eager to give them whatever they ask for.  Luckily, the emperor’s sensible daughter, Princess Blugenia, and the palace jester, Zipper, catch wind of the fraudulent tailors’ devious plan to make a fool of the emperor, and they try to craft a plan to expose them.  But who will risk being honest with their royal masters?

$150 per semester
Payment plans split payments into three payments of $50
Siblings get 10% off–contact the office for details.

December 17, 2021
Scholarship applications are due

January 29, 2022
First day of Saturday classes for the Fall semester

February 15 or 19, 2022
Auditions for The Emperor’s Old Clothes
(After Saturday and Tuesday Players classes)

February 28, 2022
Rehearsals for The Emperor’s Old Clothes begin
(this date may be flexible)

Class Times and Registration for the Short Session

Short Session For Spring 2022
Not everyone can commit to a months-long process! Join us for a seven-week session, which meets 2x a week for an hour each. This session includes theatre class and rehearsals for a 10-15 minute play. Perfect for students who want to try us out without a large commitment, or for those who can’t commit for the full semester but want their time on stage!
Register here for the Short Session