Ensemble students attend one-hour, age-specific classes, on Saturday mornings for 10 weeks OR 1 hr 15 minutes Tuesday nights for 8 weeks.  All Ensemble members are encouraged to audition for a role in that semester’s play, which is presented weeks after classes have concluded. 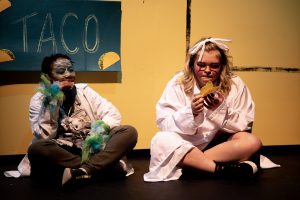 Theatre Classes for The Ensemble

This class splits its time between improvisational, creative thinking—based acting, and scripted acting. Students begin to make informed decisions on using body/voice/imagination to create characters and relationships. Each class has a maximum of 12 students.

Class Times and Registration for Devising

Students interested in playwrighting will enjoy this collaborative script-writing class. Students write two scripts every year, which get produced the following year! Devising has a maximum of 10 students. Students must have enrolled in previous theatre classes, or demonstrate comparable experience in theatre.

Our “triple threat” students will learn theatrical singing techniques, basic choreography, and acting while singing and dancing. This class has a maximum of 12 students.

Technical Theatre Class Ages 10-18
This class focuses on the design, production prep, and backstage work of producing a play! Maximum of 12 students.

Fall 2022 Class Times for Technical Theatre:
September 10-November 12, 2022
11:30 am-1:00 pm
Registration is closed
Students in this class will be invited to participate in work days and tech weeks, but it is not required for class participation.

All tuition over $50 includes the option of a payment plan.

Families making 300% or less of the federal poverty line should apply for Ohio ACE vouchers to fully pay for any CTW class!

If the multiverse really is real, it would probably be a lot more random than the movies let us believe. Welcome to Carbohydrate Catastrophe, a multiverse adventure with the villainous Sophie, whose potato experiment punches a hole in the multiverse and disrupts EVERYTHING!

Levi, Napkin, Zote, and Joanna–all from different universes–have to make sense of the mess they’re in, make a plan to defeat Sophie, and handle whatever the multiverse throws at them. Which never, NEVER makes sense.

The performances for Carbohydrate Catastrophe are January 13-15. There are no rehearsals December 20-Jan 5.

August 30, 2022
Scholarship applications are due
Families making 300% or less of the federal poverty line should apply for Ohio ACE vouchers to fully pay for any CTW class!

September 10, 2022
First day of Saturday classes for the Fall semester

October 1 or 4, 2022
Auditions for Carbohydrate Catastrophe
(After Saturday and Tuesday classes)

October 7, 2022
Cast list posted (This date may be flexible)

October 15, 2022
Rehearsals for Carbohydrate Catastrophe begin
(this date may be flexible)

No rehearsals November 24 or 26

January 13-15, 2023
Performances of Carbohydrate Catastrophe
(times will be finalized once we have the cast list)