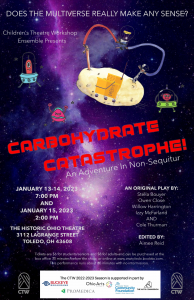 If the multiverse really is real, it would probably be a lot more random than the movies let us believe. Welcome to Carbohydrate Catastrophe, a multiverse adventure with the villainous Sophie, whose potato experiment punches a hole in the multiverse and disrupts EVERYTHING!

Levi, Napkin, Zote, and Joanna–all from different universes–have to make sense of the mess they’re in, make a plan to defeat Sophie, and handle whatever the multiverse throws at them. Which never, NEVER makes sense.